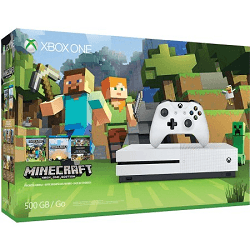 For a limited time, you can order a new Xbox One S 500GB Battlefield 1 or Minecraft Bundle for only $299.00 + FREE SHIPPING! Order the Xbox One S Minecraft Favorites Bundle (500GB), featuring everything you need to build, create, and explore! Get full game downloads of Minecraft for Xbox One and Windows 10, plus thirteen fabulous, community-favorite content Packs, including Halo Mash-up and Festive Mash-up. And now with the new Xbox One S, you can even watch 4K Blu-ray™ movies, stream Netflix in 4K Ultra HD, and play a growing library of Xbox 360 games.

These deals don’t last for very long, but you can always come back to HMB for another hot deal!

Take advantage of this offer if you’re in the market for a new gaming console. Perhaps give the Xbox One S 500GB Bundle a shot! This product usually costs $377.60, but you can get it now for $299.00 + FREE SHIPPING. That’s $78.60 in savings! If you want to save even more money, you can purchase discounted gift cards and perhaps save even more money with the best cash back shopping portals!