You are here: Home / Save Money / Daily Getaways Universal Studios Hollywood Ticket Promotion: Get 1 Day Admission Ticket For Only $139

The Daily Getaways is churning out limited travel deals for the next several weeks and if you’re thinking about planning a family trip to Universal Studios you’re in luck. Travel to the Universal Studios Hollywood this summer, as The Daily Getaways is currently offering a Front of Line and 1 Day Admission Ticket with For Only $139, which has an estimated value of $200. This offer is only available on April 19, 2017 and goes live at 1:00 PM ET, with only 250 tickets available. Travel dates are available through April 30, 2018 with some blackout dates and you can purchase up to nine tickets. Plan your next trip to the Universal Studios today! 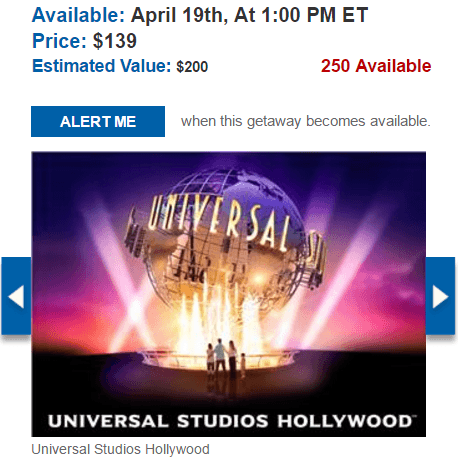 These Daily Getaway Promotions usually run out fast and since there’s only 250 tickets for the Universal Studios Ticket Promotion and each person can buy up to nine, make sure to be one of the first on their page. The Daily Getaways is currently offering a Front of Line and 1 Day Admission to Universal Studios for only $139 on April 19, 207 at 1:00PM ET. Start planning your trip today! Check out more ways to Save Money.