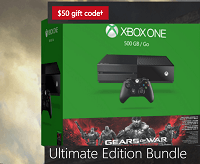 Bundle Purchase comes with 500 GB game console for $299, promotion ends tonight December 20, 2015. This gaming bundle include all of the following: One wireless controller, game download of original Gears of War, entire Xbox 360 Gears of War collection to play for free, early access to Gears of War 4 Beta and a free select game: Get Assassin’s Creed Unity, Watchdogs, or The Crew with purchase. That’s over $429.98 value for this Xbox gaming bundle. You also have the option of getting Kinect for $50, that’s 50% off retail price. Hurry and get this bundle if you have been wait for a deal as this is pretty close to what the Black Friday sales looked like and is unlikely to get much better.

Get Xbox One Bundle with $50 Gift Card:

Here is a great Holiday gift at a nice price if you were waiting for an Xbox deal. Get this Microsoft $50 Gift Card Xbox One Ultimate Edition Bundle with free shipping and you could be unproductive until February. Or until the Gears of War 4 is available. Make sure to see all of our Gift Card Offers!