You are here: Home / Diamonds / Diamond Education Glossary – A to Z Terms & Definitions 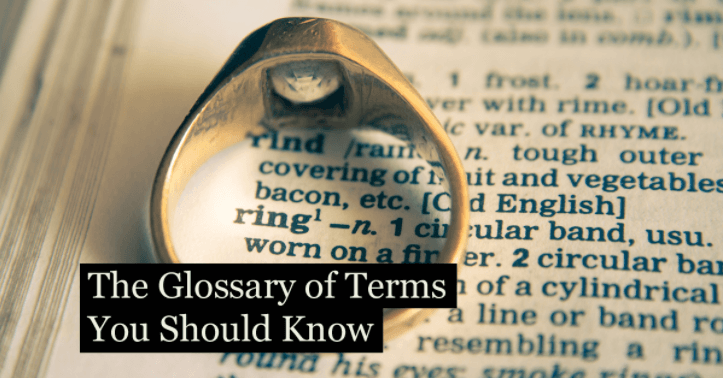 When it comes to Diamond Education, there is always more to learn. The following information provides general definitions of common terms related to diamonds and diamond grading. The first section contains terms related to diamond anatomy along with intuitive visuals. The second section contains a list of clarity characteristics and the final section contains general diamond terms. You will find listings on cut-related terms, diamond shapes, gem labs, treatments and more -many of which have links to in-depth articles. We hope you find this glossary useful, but please feel free to contact us if you don’t find the answers you are looking for!

Characteristics that form the basis of diamond laboratory clarity grades are divided into two types. Inclusions are features that are internal to the diamond or extend into the diamond from the surface. Inclusions are plotted in red on a lab report. Blemishes are features that are confined to the surface of the diamond such as abrasions, scratches, and bruises. Blemishes are plotted in green on a lab report.

The iconic look for a diamond is the shiny, brilliant, and fiery colorless diamond, however diamonds are also made to be colored too! The different types of definitions for Diamonds can be overwhelming. In this post, a number of vocabulary words regarding diamonds are included. If you see one that is missing or you would like to add, be sure to comment down below! For purchasing diamonds and jewelry online, be sure to view our full list of Blue Nile Promotions and our James Allen Review. These two online retailers are killing it on the diamond market!

Related posts:
Diamond Prices: What You Need to Know
Diamond Color Grade Scale Guide
What's the Difference Between an Engagement vs Wedding Ring?
What Are Fancy Color Diamonds?
More