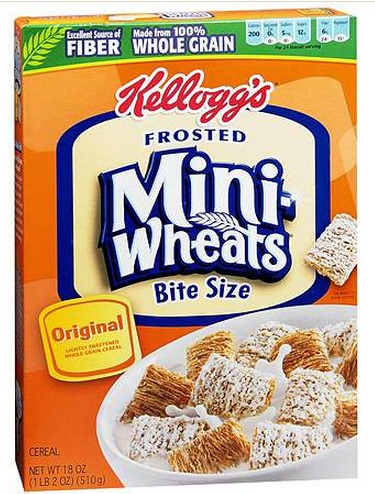 For those that bought Kellogg’s Frosted Mini Wheats between 2008 – 2009, you can now get up to $15 cash back through Kellogg’s Frosted Mini Wheats class action settlement. No receipts are necessary to file a claim. Because Kellogg’s advertising claimed of improved kids’ cognitive functions, they have established a $4 million class action lawsuit settlement fund to avoid the costs and risks of a trial. Make sure to submit the claim form by 11/29/2013.

You can see the complete detail at their settlement site, and get up to $15 with no proof of purchase required. Here’s what they have to say:

A proposed settlement has been reached in a lawsuit involving Kellogg, the company that makes Frosted Mini-Wheats. The Lawsuit claimed that Kellogg falsely advertised that its Frosted Mini-Wheats cereal improved kids’ attentiveness, memory and other cognitive functions to a degree not supported by competent clinical evidence. Kellogg stands by its advertising and denies it did anything wrong.

Submit your Claim Form online today to receive $5 per box(up to 3 boxes) of Kellogg’s Mini-Wheats purchased between January 28, 2008, and October 1, 2009. There are currently two more Class Action Settlement Claims such as the Naked Juice $45 Settlement, $35 Alexia Food settlement,  and the Barbara’s Bakery $100 Settlement – all claims with no proof of purchase required.

Hot Deal of the Day: E*Trade offers up to $600 bonus when you deposit new funds. Enjoy no annual IRA fee and no minimums including stocks, bonds, ETFs and over 8,000 mutual funds, along with 1,300 no-load, no transaction fee mutual funds.