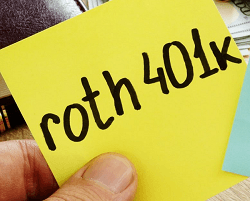 If you’re looking at retirement plan packages from your company, you may come across something called a Roth 401(k).

You may be wondering what’s a Roth 401(k), what’s the difference between it and a traditional 401(k) and if it’s a good option for you to choose. If you’re curious, read on to find out more about this plan.

A Roth 401(k) is a combination of a 401(k) and a Roth IRA. Similar to a 401(k), it’s offered by an employer and funded with percentage of your paycheck. It can be invested for retirement in many investment choices.

Similar to a Roth IRA, the funding are made with post-tax money up to the plan’s contribution limit. However, the money isn’t usually taxed again, even when you withdraw it at retirement at or after 59 1/2 years old.

If you’re working for a nonprofit organization or a school, you may come across a Roth 403(b) in your company’s retirement package.

A traditional 401(k) makes you may a tax rate between 10% – 37% or more, depending on your tax bracket, when you’re withdrawing your funds at retirement. It’s hard to predict how taxes will be in the future, but if you believe that you’ll be in a higher income tax bracket during retirement, a Roth 401(k) may be the best option for you. You’ll be paying a lower tax rate on your investment now and no taxes in the future.

If you’re part of the wealthier bracket who aren’t eligible for a traditional Roth IRA, such as single individuals with modified adjusted gross income of more than $135,000 in 2018 and couples filing jointly making more than $199,000 in 2018, a Roth 401(k) is a great way to retire like this.

In addition, if you’re young without a fully established career yet, you are more likely to come across higher taxes in the future, making a Roth 401(k) a great way to save on future taxes. However, if you’re making a good amount of income now and you expect your tax rate to drop significantly during retirement, a regular 401(k) may be better.

A 401(k) also gives you a good way to lower your taxable income and your income tax bill without experience too much negative financial impact. Since Roth 401(k) contributions are made after taxes are taken out, your paycheck will be impacted harder.

Other than the huge post-tax difference, a Roth 401(k) is similar to a traditional 401(k).

When you get another job, you may be able to keep your Roth 401(k) at your former employer, move it into your new employer’s plan if a Roth 401(k) is offered there, or move it into a rollover Roth IRA, which has the same withdrawal rules.

A Roth 401(k) is best suited for those who think they’ll be in a higher tax bracket in retirement than they currently are in. You can also max out your contributions to your traditional 401(k) and get yourself a Roth IRA that isn’t employer-sponsored.

If you’re interested in this option and your employer doesn’t offer it, it doesn’t hurt to ask them to add it. It expands your investment options to better benefit you in retirement. Check out our best brokerage bonuses to find new investment opportunities or options suited for you.