You are here: Home / Archives for Olympic Rescue It Class Action Lawsuit 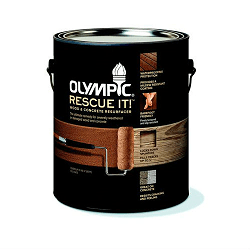 Individuals who between Jan. 1, 2013 and April 27, 2017 purchased a Rescue It! product may be eligible for a potential award from the Olympic Rescue It Class Action Lawsuit! According to the lawsuit, PPG Industries Inc. manufactures Rescue It! and Revitalize products with design flaws that cause them to crack, peel, bubble and damage the decking or substrate to which they are applied. PPG Industries Inc. denies allegations and maintains that their products are not defective, however they have agreed to settle the class action lawsuit. If you’re eligible, submit a claim form by August 24, 2018!

If you purchased a Rescue It! product from PPG Industries between Jan. 1, 2013 and April 27, 2017 you may be eligible for a potential award from the Olympic Rescue It Class Action Lawsuit. According to the lawsuit, Those who used Rescue It! products reported that the product cause crack, bubble, peel, and cause damage to the surface which it was applied on. If you were affected by this design flaw don’t worry, simply file a claim for a potential award by August 28, 2018! Don’t forget to take a look at our full list of Class Action Lawsuit Settlements!