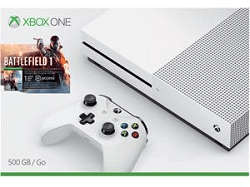 For a limited time, you can order a new Microsoft Xbox One S Console 500GB Bundle for only $298.89 + FREE SHIPPING! Own the Xbox One S Battlefield 1 Bundle (500GB), featuring 4K Blu-ray, 4K video streaming, High Dynamic Range, a full game download of Battlefield 1, and one month of EA Access. Discover a world at war through an adventure-filled campaign, or join in epic multiplayer battles with up to 64 players on Xbox Live. Fight as infantry or take control of amazing vehicles on land, air and sea, and adapt your gameplay to the most dynamic battles in Battlefield history. And with EA Access, play EA games for a limited time before they’re released and get unlimited access to The Vault, exclusively on Xbox One. With over 100 console exclusives, and a growing library of Xbox 360 games, there’s never been a better time to game with Xbox One. These deals don’t last for very long, but you can always come back to HMB for another hot deal!

Take advantage of this offer if you’re in the market for a new gaming console. Perhaps give the Xbox One S 500GB Bundle a shot! This product usually costs $419.79, but you can get it now for $298.89 + FREE SHIPPING. That’s $120.90 in savings! If you want to save even more money, you can purchase discounted gift cards and perhaps save even more money with the best cash back shopping portals!