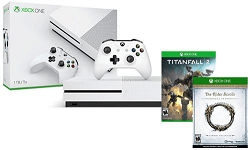 For a limited time, you can order a new Xbox One S 500GB Console Bundle with Titanfall 2 + Elder Scrolls Online: Tamriel Unlimited for only $189.99 + FREE SHIPPING! The best value in games and entertainment. The Xbox One S has over 1,300 games: blockbusters, popular franchises, and Xbox One exclusives. Play with friends, use apps, and enjoy built-in 4K Ultra HD Blu-ray and 4K video streaming. These deals don’t last for very long, but you can always come back to HMB for another hot deal! To maximize your savings, be sure to use a rewards credit card and/or pair it with a cashback portal so you can earn points/cash back on your purchases!

Take advantage of this offer if you’re in the market for a new gaming console. Perhaps give the Xbox One S 500GB Console Bundle a shot! It comes with two games, Titanfall 2 + Elder Scrolls Online: Tamriel Unlimited. With the Xbox One S, you can play the greatest games lineup, including Xbox 360 classics, on a 40% smaller console. Experience richer, more luminous colors in games and video with High Dynamic Range. Stream 4K video on Netflix and Amazon Video, and watch UHD Blu-ray movies in stunning 4K Ultra HD. This product usually costs $279.99, but now you can get it now for $189.99 + FREE SHIPPING. If you want to save even more money, you can purchase discounted gift cards and perhaps save even more money with the best cash back shopping portals!